This blogpost is from www.mirthevanliere.nl. I will share my experience and in the end I will confess about how I cheated.

Thursday September 15th. I just turned 31, ten days ago. It is the first time I compete at a World Championships. During the months towards this big competition I followed an intensive training schedule and a strict sports diet. And it is working. I’m not having any injuries at the moment, I’m feeling strong and I know that I’m prepared well for this competition. 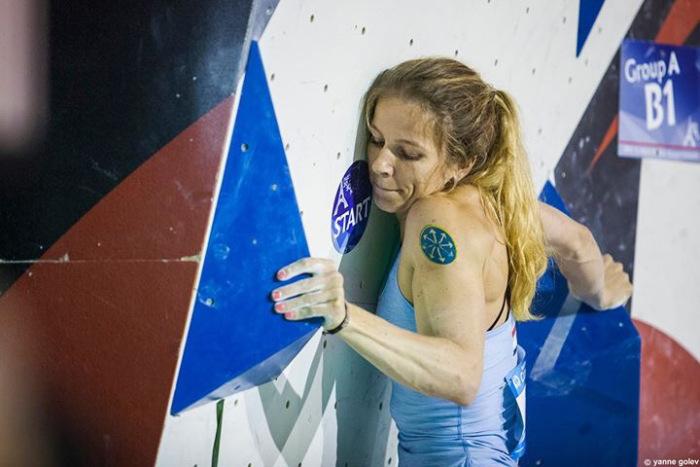 Isolation: before my qualification

I’m sitting in the isolation room, watching the strongest girls like Megan Mascarenas, Akiyo Noguchi, Miho Nonaka and Petra Klingler warming up for their qualification round. I’m sitting and waiting till it’s my turn. I’ll have to wait for three more hours.

In my small notebook I’ve got a carefully prepared time schedule. It’s 10 AM right now. Time to eat my competition meal. Two-and-half hour before I’ll be climbing. I know that this food-schedule works for me. It worked out excellent during the Dutch National Championships a couple of months ago and the World Cup in Munich last month.

11.30 AM. Time to warm up. My qualification round starts in an hour. I got a bit cold from sitting on the ground so I’ll need to warm up slowly. The first moves while warming-up are always different for me. I can’t feel immediately if it will be a good climbing session. Right now it feels like I have a lack of energy. Kind of strange … hopefully it will fade away while warming up. It’s time to get on some harder stuff to wake up my body and get my fingers ready. It’s still not going great. I’m not feeling as strong and it feels like I’m quickly out of breath. What’s going on? I’m telling myself not to make a big deal of this. Right now it might not feel as good, but as soon as I’m behind the wall I’ll get psyched enough to climb my hardest.

The qualification round was a crazy one. Not so much physically, but especially mentally. I managed to top the first two problems, but I had no idea how the other girls in my start group did. I got a bit angry with myself because it took me five times to top the problems. I wasn’t focused enough. I started talking myself down: “I probably should have flashed these boulders”. Immediately I grabbed myself together and said: “you never know! Just try to top the other three problems as well”. Unfortunately I didn’t top any of the other problems. If I did, I would have been in semifinals. Looking back at it, I feel like I could definitely be able to top number three. Maybe also the last one. But yeah, that’s always easy to say. You have to do it at that moment.

I was a bit sad while walking to Stefan, who was waiting with a big smile for me. “It didn’t go well” I said. He responded: “Why not! You topped two problems! With two problems you could have a spot in semifinals”. Whow, I wasn’t expecting that. It turned out that the problems were quit hard. It wasn’t strange that I didn’t finish the last three problems. Most of the competitors didn’t. I ended up 22th in my startgroup, a 43th place overall. Much higher than my ranking after the World Cup in Munich. It’s strange how it can feel so different. In Munich I felt strong like crazy during qualifiers. I was flashing two of the problems and topped out three. But the problems were much easier and in Munich I had to top ALL of the problems to get a spot in semifinals. So my result in Paris, my two tops during the World Championships, was actually quite good!!

But yeah, I need to confess something. I cheated during this competition … While writing this, I can feel my heart beat through my veins. It’s kind of scary to tell this in public. And a relief at the same time… So what did I do? Well, I didn’t climb this competition on my own strength. I used the power of something else. I wasn’t feeling totally focused and I got out of breath very quickly. I tried everything I could to calm down and to focus. While I was standing next to the wall, looking into the crowd, getting psyched for my first qualification boulder … there was much more going on in my mind and body than I needed. I tried one last thing to get in the right mindset.

I said: I’ll try my hardest for both of us. It’s your first World Championships and mine. We get this.

Our sweet little monkey. Just 10 weeks and 2 days within me. And we only knew that for four days! We are so so so super happy. And it’s strange, but as a pregnant woman, you immediately feel protective. I didn’t get myself jumping like crazy or squeeze my core as tight as possible. Although the specialists told me I could compete like normal, including jumping and falling, a deep feeling within me kept me from doing that. I wanted to keep the new life within me 100% safe. Now, six weeks later, we’ve got the incredibly wonderful happy news that our little one is doing great! 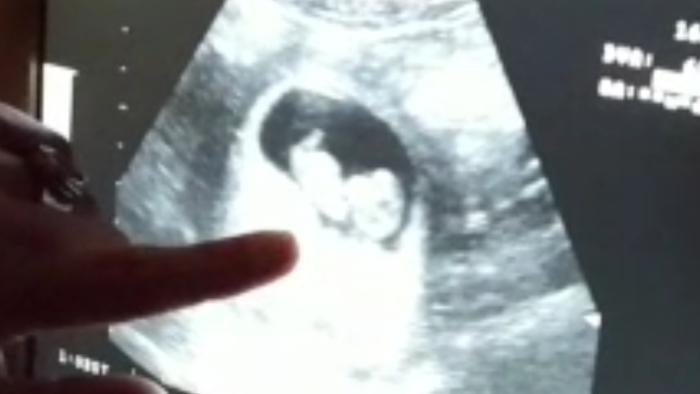