The Eiger rises straight above Grindelwald. Together with the Mönch and the Jungfrau, it forms a lofty barrier with a distinctive pyramid-like shape. The Eiger has forged itself a special status among the great summits of the Alps. Its north face is an endless source of inspiration and exploits – a benchmark for every mountaineer. For such a face-to-face with the mountains, you must be physically and technically ready, but also in good company. With more than 30 days’ climbing on the crag under his belt, Lorenz Frutiger is the Eiger specialist. He agreed to share his local knowledge and experience with Louis Laurent, a guide from Chamonix.

Louis has just driven four hours to meet his future rope-team companion, before two days’ climbing on the mythical north face. Although he had already made one trip here, to test himself on the 1600m face up the 1938 Route, opened by Heckmaier, he does not know exactly what Lorenz Frutiger has in store for him. Lorenz is a local lad who grew up in Grindelwald and finally followed in the footsteps of his mountain-guide father. Over the past ten years, he has made the Eiger his favorite playground – combining trips, selected portions of routes, and all kinds of climbing.

They have arranged to meet in the Millet brand’s new base camp in Grindelwald: the guides’ bureau, which also serves as a shop, stocking all the necessary equipment. It is also the meeting-place where mountaineers and climbers gather for coffee. The atmosphere inside is warm and authentic, with a wood-and-stone interior that exudes a mountain spirit. And you naturally receive a convivial welcome. 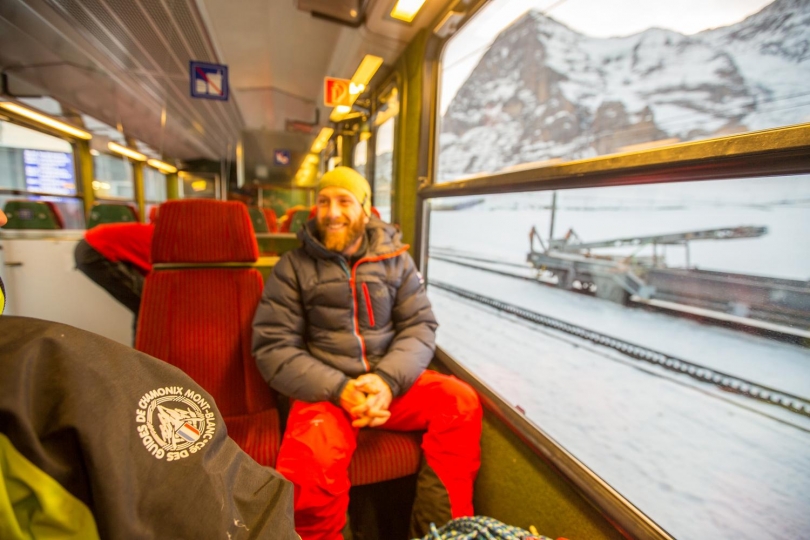 11am: Lorenz has settled in quietly on the banquette next to the window. He knows that his new climbing companion will arrive soon. To date they have only exchanged a few emails; Lorenz has not yet heard the sound of Louis’s voice. He has, of course, been curious and professionally conscientious enough to look up some details about him. A member of the Chamonix Guides Company since 2007, Louis was previously a ski instructor, a mason in the summer months, and also a refuge caretaker. As for Lorenz, the call of the mountains came late to Louis, and meanwhile he learned another trade. But these two men’s passion for verticality swept everything before it. For the past 10 years, climbing has been both job and hobby: they have combined trips with clients, journeys to crags worldwide, and expeditions at every latitude and altitude. They may not know each other yet, but they have much in common: the same values, real professional ethics, and a deep respect for the mountains. 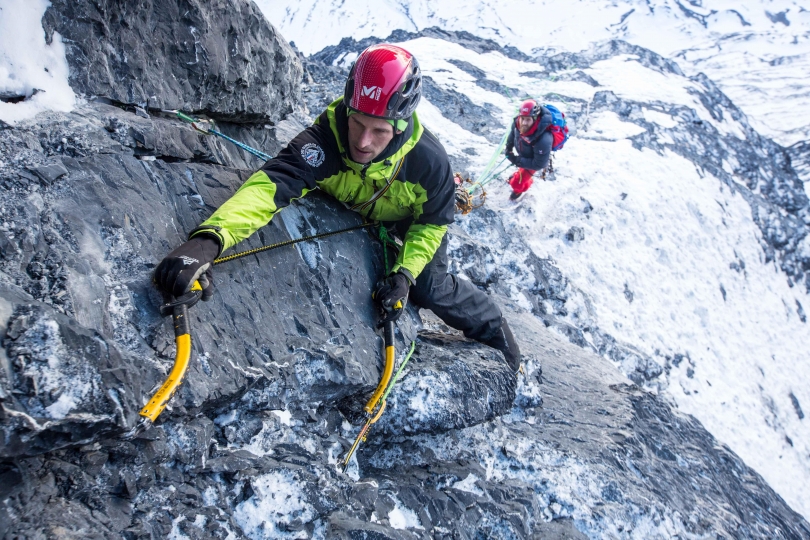 Louis walks into the bureau, accompanied by Bertrand Delapierre, an excellent mountaineer and mountain film maker. Lorenz greets them. “My friends call me Louison,” offers the newcomer readily. After chatting for an hour, the three mountaineers decide to go for a recce at the foot of the face. A five-minute walk takes them to Grund railway station, at the lower end of the village. As the Jungfrau train winds between the hills, the gradient stiffens, reaching about 25%. The train climbs, and the landscapes roll slowly by.

The mountaineers’ eyes are seeking out the summit, but thick cloud cover is still masking their object of desire. Half an hour later, the train reaches Kleine Scheidegg, at 2061 meters altitude. There is a crowd of Japanese tourists on the platform, ready to ride back down into the valley. This mountaineering mecca is also a renowned tourist destination thanks to the Jungfraujoch, the highest railway station in Europe. Louison, Lorenz and Bertrand make an eye-catching exit with their alpinists’ backpacks. They steer left, leave the station, and head towards the Hotel Bellevue des Alpes. Since 1840, the hotel has stood in an ideal location, in a panoramic setting at the Scheidegg pass, with an unrivalled view of the Eiger. From this vantage-point, observers have been able to witness some of the most beautiful and the most tragic stories in mountaineering, playing out in real time. Having finally reached the foot of the Eiger, they wait fifteen minutes for the cloud to break, thus revealing a breathtaking view of the north face in all its splendor. 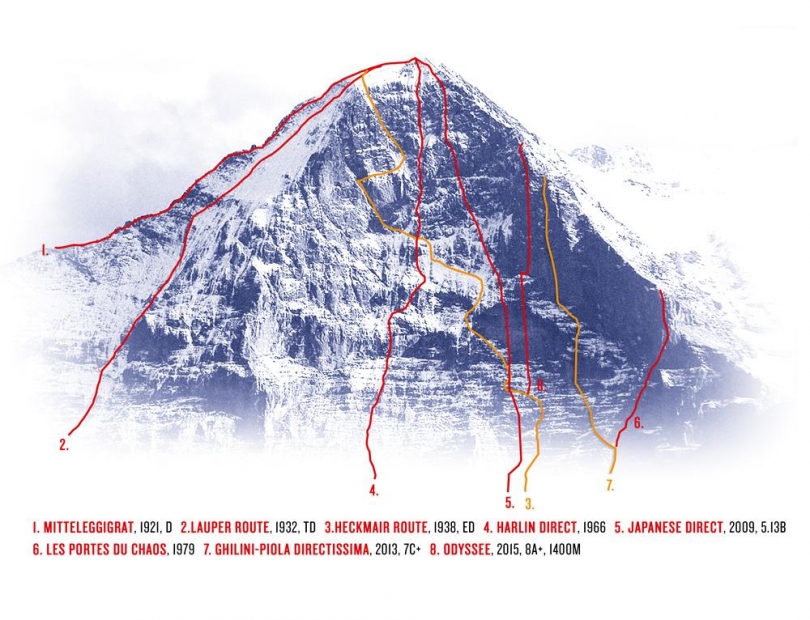 As they behold the spectacle, the two mountaineers’ eyes are glistening. Thus begins a detailed description of each line. Over many years of mountaineering feats, more than thirty routes have been created. The best-known is obviously the landmark route opened in 1938 by Heckmaier, winding his way up the face. Lorenz runs through each route, named after its first ascensionist(s). The finest alpinists of each generation, operating at the top of their game, have come here to consign their names to posterity: Harlin, Lauper, Messner, Piola, Ghilini… Every nation has wanted to display the excellence of its mountaineers: Poles, Czechs, Russians and Japanese… The Japanese Direttissima, opened in 1970, is a magnificent vertical line – one of the most direct.

Lorenz has decided to take his companion to hook wield their ice-axes on the upper part of the route. A look at this line stirs mixed feelings: fascination and excitement, respect and humility. “For a mountaineer, the fascination lies in testing yourself against the difficulty of a peak. Even after more than thirty days’ climbing on this face, I feel deeply respectful and very humble every time,” says Lorenz. The north face of the Eiger is truly awe-inspiring. Tackling it for the first time, one feels profound modesty. Louison and Lorenz, after talking extensively, now fall silent, and gaze at the face a few minutes longer. They know that tomorrow, the serious stuff begins.

Thursday December 3, 7am, Grindelwald base camp. Minus three degrees Celsius. The clear sky heralds a fine day, and the air is dry and cold. The unsettled weather has finally given way to a stable anticyclone, which will hold for the coming days – as Lorenz knows; venturing up the mythical wall is not to be taken lightly. The packs were buckled the night before, with the bare minimum. 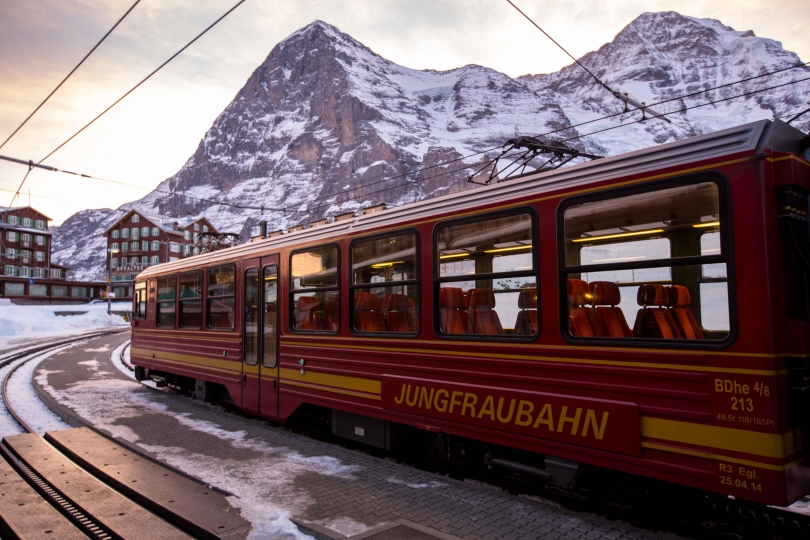 7.15am. They walk briskly to the station, as the first train leaves in five minutes. Before it sets off, Lorenz goes to see the driver and asks him to drop them half-way – it’s a common practice. Many mountaineers access the wall via the Stollenloch, literally “the thief hole”, which was actually a window for workmen to discard rock debris when the tunnel was being built in 1912. It now provides an easy point of access to the north face, and a “comfortable” fallback solution. The train comes to a stop, and the two mountaineers alight swiftly.

The window, located one-third of the way up the wall, is totally blocked by snow. It takes Lorenz a few minutes to clear the way. Then the duo get down to business. Lorenz begins the ascent on lead. Both fine mountaineers, they understand their partner’s every move. 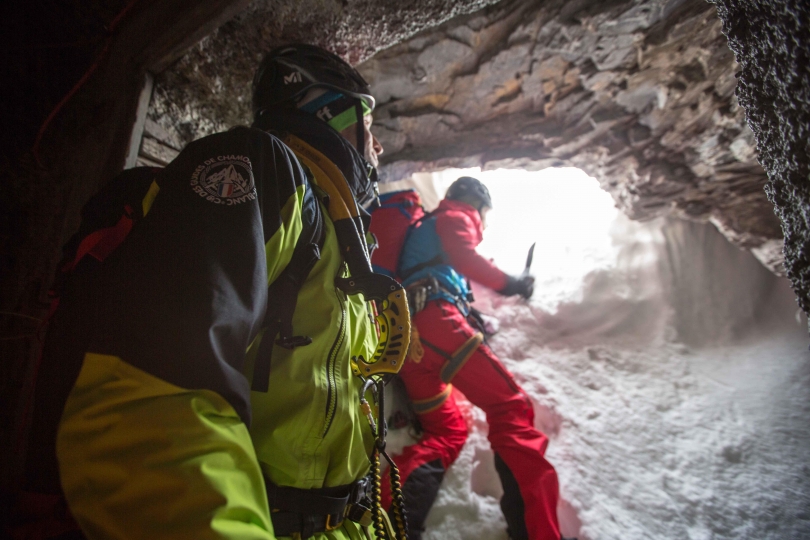 Each is reassured by his partner. The snow on the first pitches is perfect, and they make rapid progress. The team veers slightly to the right, seeking out lines of weakness, to connect with the Japanese Direttissima. Now they are progressing with modern alpine techniques over mixed rock-and-ice terrain. In these sections, every foothold must be made to count. The grade is about M5. Each movement takes them a little further into the vertical dimension. But despite all the experience of these two mountain professionals, their progress is slower than expected. As they noted the day before, the wall is fairly dry, with scant ice. It is hard to find good anchors for protection. The limestone rock is of poor quality, and has a tendency to crumble. “I climbed this section quite a few years ago, but I don’t recall the rock being so bad,” says Lorenz. 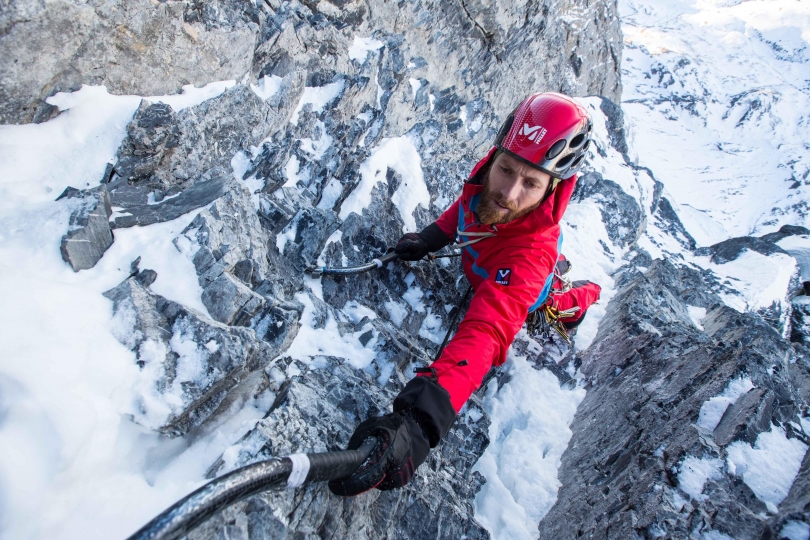 Despite the terrific atmosphere on the north face, there is tangible tension. Several falls of stone clatter and echo their way down the wall. Fortunately, the two mountaineers are getting on famously. Lorenz tells Louison about the art of using cams in this very particular type of terrain. What works a treat in the perfect cracks in Chamonix’s granite does not necessarily apply in the Eiger’s limestone. “You have to put cams in cracks at very specific places, where the rock closes up. It’s a feature of climbing the Eiger,” explains Lorenz. To secure an old piton as an anchor, Louison hammers it a few times, and some adjacent rock shatters.

Thankfully, they are able to progress and belay themselves more easily in the ice. A few more pitches and it is Louison’s turn to lead. Further up, the rock is slightly better. The wall is steeper now, and the climbing more difficult; the level of concentration is higher, too. Louison is forced to climb bare-handed to gain purchase on the holds. Some sections of the wall are as tough as 8a. The two men meet up at the belay, and congratulate each other. It’s time to go back down. 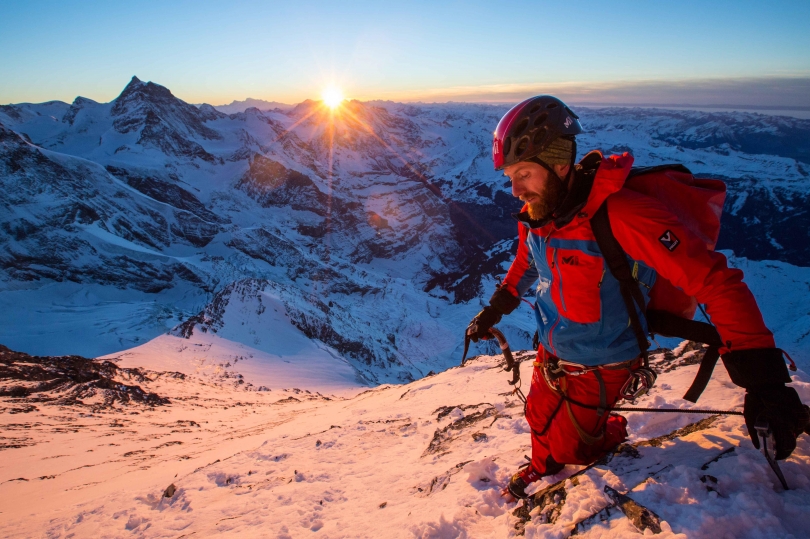 They have spent nearly seven hours on the face, climbing together purely for pleasure. They have functioned really well as a team, attuned in their human values, commitment and respect. “I’ve really enjoyed our time together, it was fantastic,” says Lorenz. “It’s been good to get to know Louison and climb with him.” After this first immersive experience on the Japanese Direttissima, they are keen to return and climb together again, and maybe do the whole route..