"POP!" I hear metal pulling from the rock, generally not a good sound.

"SNAP!" That last savage jerk dashes my last hope for this ending well. The earth rushes up to claim her prize and gravity proves himself once again. 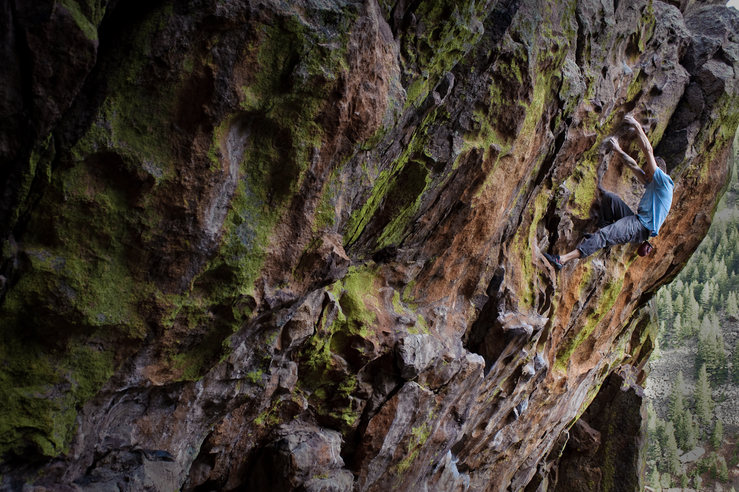 I get the phone call early Sunday morning, my climbing partner, Matt, wants to try something hard and scary in Eldorado. He always calls me before the sun comes up and he's always psyched. I meet him at the usual spot and we head into the canyon. His friend Joseph Crotty, an Eldo classic, is meeting us there.

The scramble up the along the west face of Redgarden to the Kloof Alcove does not take long. The Kloof Alcove is a short, overhanging area with some fantastic sandstone face climbing; just my style.

Always one to encourage, Matt says, "You should try to get the onsight of the Kloof. I free soloed this a couple years ago. Rack up!"

The namesake of the alcove is a 5.10+ classic, by all accounts something I should be able to easily onsight. I look at the inviting pockets and think, "Alright, let's do this!"

I'm a bit nervous, though; I'm mostly a sport climber. I'll try just about anything with bolts on it, but I can count my trad leads on two hands. Until recently I'd free soloed harder than I'd led anything trad (5.9), and I'd never really fallen on a cam. But the route looks like a great one to push myself on.

I pull up over the first twenty foot section of unprotectable 5.9 climbing to a ledge. From an awkward stance I stretch to put in my first piece, a .3 Camalot, in a crack that's a slightly out of my reach. I can't see the placement well but I tug on it a bit. Should hold.

The route starts to diverge; some of the chalked holds go straight up along a small crack towards large pockets, and some lead left out an angled crack. Trying to remember the advice Matt gave me about traveling left, I take this route. I place another small cam in the angled crack that accepts the cam, but it has the potential to walk. As I'm thinking about backing it up Matt starts yelling, "You're off route!" I work my way back to the vertical crack and make a move through the crux.

I start to pump out, getting desperate. I look for another placement, but nothing is immediately available. Just above the next move I see a crack hungry for a cam. I set up to make a move and throw for what looks like a jug. I slap onto a sloper, not what I'm expecting. I start to slip and yell out,"Falling!" In hindsight, I probably could have held on, but it wasn't quite good enough. I've fallen hundreds, maybe thousands of times. I don't think twice. Why would this fall be different?

I fly towards the unmoving ground, taking note of my first failed piece of protection zinging down the rope. The rope pulls taught again, but only for an instant. The sound of the second piece failing echoes in my ears and I slam into the ground, lying on my back, 30 feet lower than the moment before. Miraculously I land in the space between the knife edge of a bowling-ball-sized rock and a large slab. The cam that caught for a second swung me in just enough that I didn't land on my feet, most likely avoiding a broken leg or two. I land in a reclined sitting position, impacting my tailbone but amazingly not breaking it.

No air. My body convulses, wriggling away from the point of impact like a snake, desperate to find a position I can breath in. I feel hands pushing me to the ground.

"Don't Move!" Matt and Joe hold me down so I don't hurt myself more. Finally, the air re-enters my lungs and I lay still.

I evaluate my condition. My ass hurts more than I can explain. There is a burning sensation in the middle of my back that explodes out across my body when I move. The outer part of my right hand hurts and there is a visible mark where I hit it on a rock. Otherwise I'm fine! I am alive! My head doesn't hurt, and my friends are taking care of me. They take off my climbing gear, cover me in jackets, and try to make me as comfortable as possible.

Matt calls 911, asking for a rescue, and goes down to the parking lot to meet them. Joe keeps me awake and talks to me about anything he can think of. He tells me I should call my girlfriend and let her know what happened.

"Baby, I've had an accident. I'm hurt but alive. I think I've hurt my back. Rescue is on the way. I'm going to the hospital. I'll let you know more when I know more." I cry for the first time when I am talking to her. She is crying too, taking in the news. 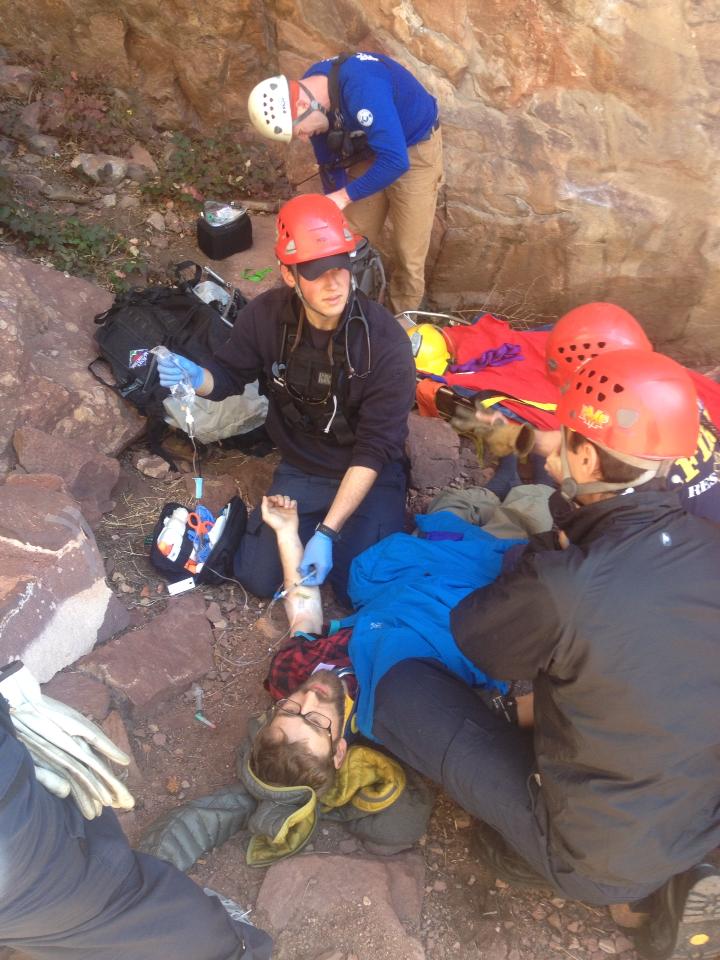 Rocky Mountain Rescue arrives on the scene and they begin to prepare me for the descent. The medic gives me an IV of pain meds and I'm lifted carefully into a metal litter. I'm secured by an air mattress blown up around me, limiting my movement, and my arms and legs are strapped down to keep me from falling out of the litter. Almost 30 volunteers are involved in getting me safely down the mountain. Rather than carry me down the path they make anchors every 180 feet to belay me straight down. The volunteers lower me down the steep scree field, four of the men holding on to the litter the entire time making the journey as smooth as possible. 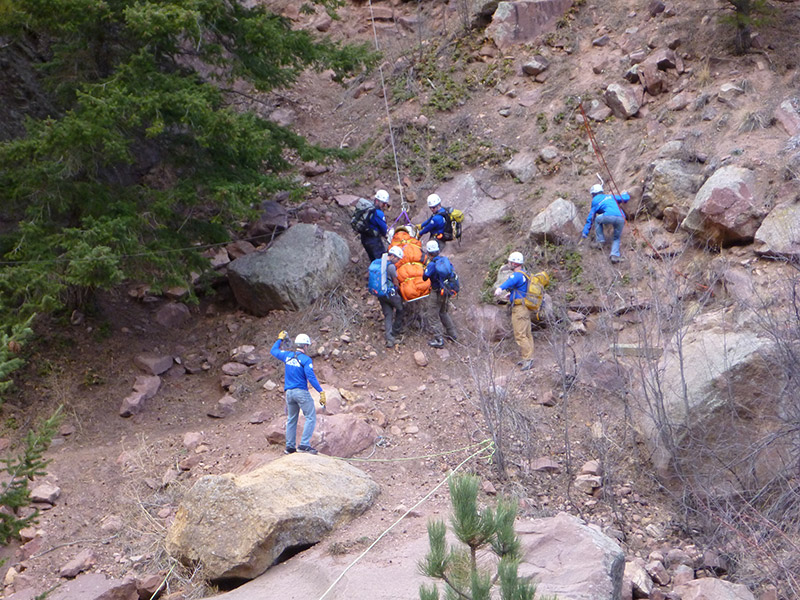 The ambulance doors shut and I'm on the way to the hospital. The whole trip off the mountain to hospital takes about three hours.

I walk out of the hospital several hours later. I WALK out! Amazingly, after a thirty foot ground fall I can boast that I only have a compression fracture of my T11 Thoracic and a fracture in my right hand's 5th metacarpal. What hurts the most, by far, is my miraculously unbroken tailbone. It hurts to sit, to move, to much of anything. But still, it's not broken.

Recovery is hard. Sleeping is the worst. After a couple of weeks I only need to take pain pills at night. I can't just lie in bed and do nothing, so I go to the YMCA to swim and use the elliptical machine most days. I was on my swim team in high school, and getting back in the lanes is freeing.

After six weeks the back brace comes off. The bones are officially healed, but I still have to be careful. The muscles still think my back is injured. From the beginning my tailbone still hurt so much I couldn't sit so I converted my desk to a standing desk. For a month and half I was either laying down or standing. But I'm thankful; friends who have also broken their back tell me how much worse they had it. I have been in relatively little pain. The biggest struggle has been not to climb, but after I get my back brace off I start easy climbs in the gym.

My dad says that I need to evaluate the risks I'm taking in my life. Maybe he's right, but really, he's not one to talk. He recently said, "I still have you beat by twenty feet!" when I was talking to him on the phone. He fell fifty feet into a pit cave and broke his back much worse than I did back in 1995.

A lot of people asked me if I am going to trad climb again, and now over a year later I have. I've learned what I did wrong and how to avoid those mistakes: 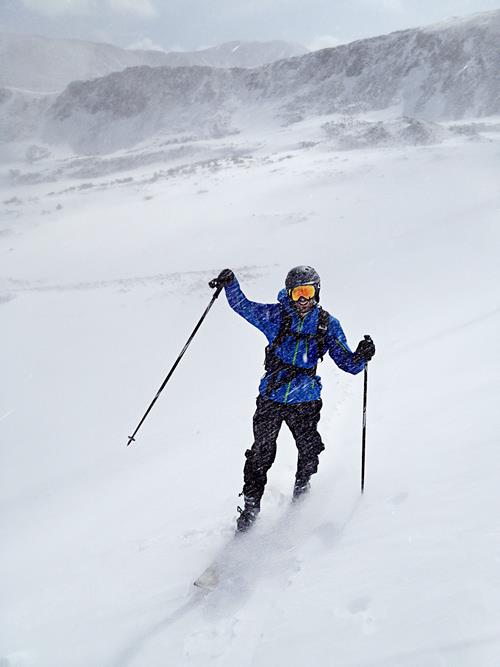 Just a month before my fall I was caught in an avalanche. From that I determined that I needed to change my perspective on backcountry skiing. I'm not looking for the "sickest" lines on the deepest powder day (at least in Colorado's terribly unstable snowpack), but I'm going hiking into the beautiful backcountry and MIGHT get the opportunity to ski some sick lines if the conditions are safe. The same applies to trad climbing in relation to sport climbing. When I'm climbing on bolts I can go balls out, throwing for that distant jug, and if I miss it I take a nice whipper. There's little consequence in most situations, and I take advantage of that. But when I'm trad climbing I need to respect the rock, respect the gear, and especially respect the danger. It's still good to push yourself in dangerous situations, you just need to be smart about it. I need to be smart about it. 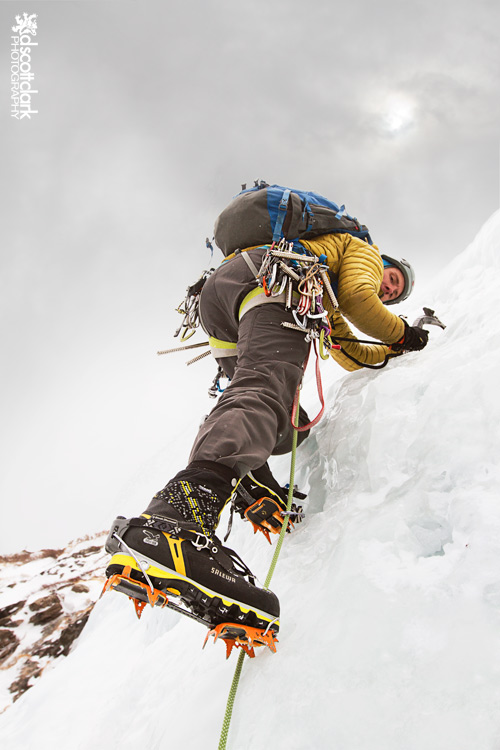 Two years ago I picked up ice climbing. I love it, and I kind of go at it with a fearless abandon. I have yet to fall while on lead, and I don't plan on it. But, especially after this fall, I need to evaluate the dangerous situations more carefully and place the proper respect on that activity. I need to change my headspace according to everything I do. The opposite would be like getting comfortable doing jumping jacks and thinking you're prepared to BASE jump.

I've now been climbing again for over a year, happy to have the ability to scale rocks above the ability level I was when I fell. Climbing has been a passion of mine since I was fifteen, and I'm not going to let an accident stop me. I used to ride horses as a kid, getting bucked off too many times, but I always got back on. I'm stubborn and passionate. Accidents happen, but we have to continue learning from our mistakes if we are going to keep progressing, and well, staying alive.